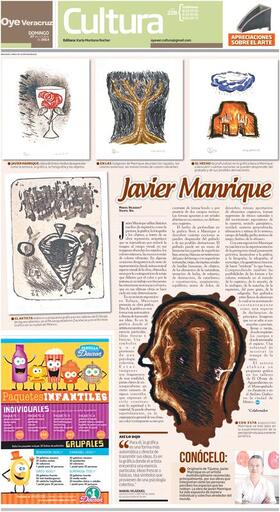 Javier Manrique uses various forms of expression such as painting, graphic art, photography, and objects. Through his work, he represents archetypes which are intensified by reducing the image to the visual field; scratching, as well as extensive and monochromic vibrant colors abound in Manrique’s images. Occasionally, all traces of representation disappear thus offering autonomy to the visual aspect of his work. This is sometimes achieved by contrasting areas which differ in terms of color or texture. In his work, tectonic structures and voids—which in his most recent work become increasingly determining—are often found.
In his most recent exhibition in Xalapa, Manrique presents his graphic artwork. For him, graphic art is a more automatic and direct way to convey his ideas; in it, the artist finds a particular essence, fresh and basic ideas. The symbols he uses are extracted from a collective psychology. These images are fragments of a totality, key pieces in a puzzle—a certain number of known signs which express the continuous cycle between the spiritual and the material. In the general organization of his art pieces, we can see, repeatedly, a color opposed to another through contrasts of form/content or through the symmetry in two neighboring fields. These forms’ aim is to become open signs in a road—they suggest, rather than define.
The fact that Manrique has delved into the graphic art has led him to discover the various notions that can be derived from engraving and its possible derivations. Through smooth, serene, white surfaces, an engraving can be a wailing wall; through tormented, old, decrepit surfaces, it can bear witness to the passage of time—signals of human traces, objects, elements of nature; a feeling of struggle, effort, destruction, cataclysm, or of construction, emergence, equilibrium; remains of pain, disorder, ruins; a provision of organic elements, of forms that suggest natural rhythms and the spontaneous movement of matter; a sense of landscape, unity; generalized matter; an affirmation and appreciation of that which is earthly; a battlefield; a garden, a playing ground; a destiny for that which is ephemeral.
In his exhibition, Manrique moves further into experimenting with a purely pictorial visual perception and plunges himself into graphic art, lithography, woodcutting, monotype work, and aquatint in order to “evince” what he is looking for while also understanding the possibilities of forms and colors, entering into the world of the organic, the shapeless, the ambiguous, the stain, the expression, the pure gesture, the calligraphy. His engravings are packed with allusions which are constantly accentuated as some sort of declaration of principles—images of which it is impossible to tell whether they are shapeless or accurate, filled or empty, or even where the bodies begin and the space ends. He has the will to show the trap of reason.
El Obraje, in Aguascalientes, Museograbado, in Zacatecas, and Archivo Gráfico, in Mexico City are the workshops where this artist prepares his graphic work.