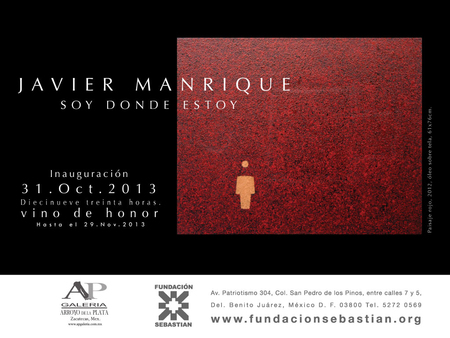 I Am Where I Am
(Soy Donde Estoy)

According to Western philosophy, being is the quality that that allows an entity to define
itself. To be is to exist in space. A being observes its surroundings to locate itself and to know
what it is and where it is.
Every observation is an interaction with space. To choose an angle, to focus one’s
attention, to exercise the free will of a conscious gaze or to let one’s eyes wander modifies what
one sees, delimits and interprets it. The observer is also impacted by the quality of the light, the
range of colors, shapes and their shadows.
The artist is an observer, an explorer, a navigator, a seeker of spaces. Among his human
traits, it is curiosity that drives him forward and guides his steps, propelling him to travel the
expanses he has experienced and imagined, pondering, absorbing, and elucidating its signs to
produce his own. He is never content with the satisfaction of basic needs and deep desires.
He roves, recalls, recommences, recreates. He spans and transcends the landscape to
make meaning. His perspective can be interior, exterior, and, above all, a combination of the
two.
Painting is one of the languages that allow him to keep a log of those perambulations.
Javier Manrique’s painting is the way he positions himself in a personal quadrant. Within
this quadrant he incorporates symbolic elements in his representation of a context. It is not
completely abstracted. The visible calls to that which is insinuated. His interpretation of the
surroundings produces a sort of minimalist gloss in which color takes precedence over form and
guides the gaze of the observer.
In the face of the enormity of the cosmos, visual language is the conviction of a faith, the
manifestation of a fundamental rootedness, the concision of an allegory.
Attentive to light’s whims, the artist captures the mutations and alternatives it produces in
the spectacle of vision. Nature thus reveals the dissimilar and complementary instants that
constitute the progress of what is glimpsed. The vertigo of the vastness transforms the enormity
into portions, into a concrete space that in turn defines the being. In his Poetics of Space, when
discussing annunciation, Bachelard quote Noel Arnaud: Je suis l’espace où je suis (I am the
space where I am.) Manrique agrees: I am where I am. The place transforms me and I transform
it. Public space becomes intimate. When it is mine, I can share it.
His technical treatment and use of materials (in this case, oil paint) responds to a need for
affirmation. Pigment is an essential element, not just because of its chromatic contribution, but
its corporeal nature, as well, because of the texture and density it offers. Color is a presence sufficient unto itself. Manrique’s palette confines itself to solid colors in objects, deeping into compound tonalities in the expanses.
The smooth surface begins to hum with delicate touches of paint. The brushstrokes stubbornly overlap, producing an effect that is undeniably convincing, like the rower who imparts force to the oar to drive the vessel forward. Javier Manrique rows through worlds that
exist in their own right because he has captured them. It is no longer an imagined universe, but one that is present, though his economy places it outside of time.
I am where I am. My essence stands in opposition to nothingness. I am substance and idea. I exist in the idea and the substance. My landscape contains and liberates me.
Maliyel Beverido
(tr. Mark Schafer)
Powered by